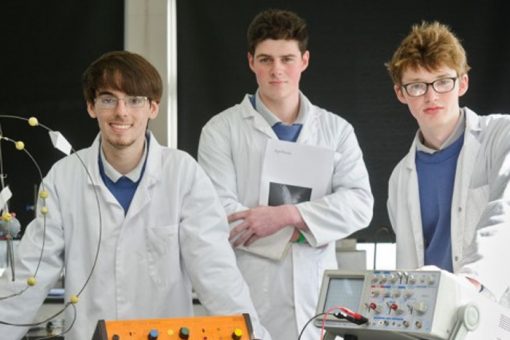 FOUR Clare students have taken one giant leap by coming first in their category for a major international competition ran by NASA.

The St Flannan’s students have come top in the senior small team category in the NASA/Ames Space Settlement Design contest.

They now have a chance to present their ideas in front of an audience of scientists and those in the space industry at the International Space Development Conference in Puerto Rico next month. Some of the biggest names in space exploration will be at the five-day conference, including astronaut Buzz Aldrin.

Eoghan Keane, Kieran Maher, Sean Donnelly and Jason Herbert designed a settlement for thousands of people in the asteroid belt that lies between Mars and Jupiter. Their innovative design, orbiting around the dwarf planet Ceres, features agricultural, residential and industrial areas to support 10,000 people. The students worked with teachers John Conneely and Grainne O’Brien, with support from Michael Horgan, on the project.

As well as facing the challenge of recreating gravity for their almost donut shaped settlement, the four even managed to design a new financial system, currency and political system. For the residents of this space home, it won’t all be work, with a low gravity area in the middle of the settlement which would be used for recreational purposes.

Teacher John Conneely explained, “The idea is that this will be a sustainable settlement, that it won’t just be about scientific work. For instance, the low gravity area could be used for exercise and recreation. The settlement had to be self sustaining, so the students had to come up with a way to grow food. We decided that the asteroid belt would be a good location because they could use the minerals and water available. Research has been done looking at using meteorites to grow food and NASA currently has a mission orbiting Ceres.”

The school has done well in the competition in recent years, however this is the first time that they have won first prize in a category. Previously students at the school have come in second and third place, with two honourable mentions.

“This has been a fantastic achievement for the students to do so well in this competition. They put in a lot of dedication, working for nine months through break times and on some weekends. We are thrilled that they have done so well, it’s great,” said Mr Conneely.

Efforts are now being made to secure the €10,000 funding needed to ensure the four students can get to San Juan in Puerto Rico for the conference, which runs from May 18 to 22.

“We are hoping that somebody will come on board and support this as it is a fantastic educational opportunity for our students and is a great achievement. While at the conference, they will have an opportunity to present their project to an audience of scientists and space industry people as well as students. This could be the first step in a career in science. And it will have a knock-on in encouraging interest in the sciences among students,” he added.

Press Release from The Clare Champion